Anscombe Archive at University of Pennsylvania 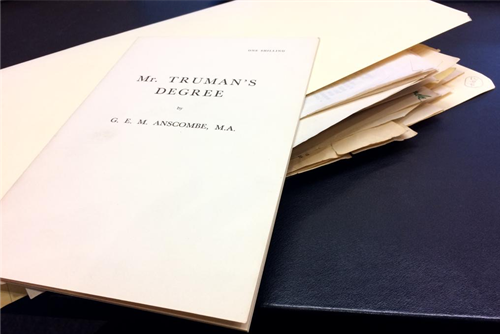 We are just back from an incredible trip to Philadelphia and the Collegium Institute and UPenn Archives. The wonderful Collegium Institute, based at UPenn, have recently acquired the Elizabeth Anscombe’s archive. The material runs to over 60 boxes and includes notes on the translation of Philosophical Investigations, an incredible run of postcards between Anscombe and Kenny, discussing metaphysics, theology, logic, action and language, and drafts and notebooks from throughout Anscombe’s philosophical career.

One of the most moving parts of the collection relates to Anscombe’s ‘Mr Truman’s Degree’ – Anscombe’s 1956 attempt to stop Oxford University from awarding an honorary degree to former-President Harry S. Truman. He is, she said, guilty of mass murder and as such should not be shown honours. The archive contains dozens of letters, largely from women, sent to Anscombe from across the globe to thank her for her intervention and to commend her on her bravery. Among them is a letter from Hiroshima, sent by a witness to the bomb who is dying in hospital from its after-effects.

We are just sifting through our finds but hope to be able to share more, with permission from the Archive, later.

While we were there we gave a talk to the department – read about that here!