In the UK, over half of philosophy undergraduates are women, but only a quarter of University philosophy posts are occupied by women. While other arts subjects employ men and women in more-or-less equal measure, Philosophy is dominated by men to a degree more common in Maths and Physics.

Why do so many young women leave philosophy? Should we care?

The debate around women in philosophy is often polarising, essentialising and pretty damning of contemporary philosophy. Women don’t like arguing, combat, and aggression, so can’t cope with the disciplinary culture. Women lack the sort of mindset that is required to devote one’s life to solving glorified crossword puzzles, so opt out in search of something more meaningful. Women don’t get a kick out of status indicators like journal publications, so aren’t competitive in the current job market. Let us put to one side the well-documented sexual harassment, sexual assault and simple everyday sexism within academic philosophy (https://beingawomaninphilosophy.wordpress.com/). Even if it is true that women are selecting themselves out of the discipline because they are intimidated by the culture, bored by mainstream debates or unmotivated by the rewards on offer, we cannot conclude therefore that domination of men in philosophy is nothing to worry about. If the disciplinary culture, topics and norms are set by privileged white men, then of course we would expect those who fall outside that dominant group not to feel at home.

What then should we and can we do?

At Durham University we are trying an experiment and we are inviting everyone to join in. We are asking whether we might contribute to ending the male domination in philosophy by providing our women undergraduates a space within their studies where prevailing demographic norms are inverted – where no male philosophers are on the reading list, where there are no male dons and where the dominant peer group is female. We are hoping that this space will enable them to develop norms, interests and support structures that can sustain interest and support transition into post-graduate study and beyond. The experiment is inspired by the experiences of four young women in Oxford University during World War II. Elizabeth Anscombe, Philippa Foot, Mary Midgley and Iris Murdoch began studying philosophy at Oxford in the late 1930s. During the war, most of the male dons and undergraduates were away, and this created a university environment that was uniquely dominated by women. Mary Midgley, who at 98 recalls those war-time classes and the friendship the quartet formed, believes that the absence of men helped them. They were, she says ‘able to get heard’. Iris Murdoch described that time as a ‘world of women’.

With the help of Amber Donovan, Sasha Lawson-Frost and Ellie Robson we have a wonderful new and updated undergraduate reading list. This reading list has been designed specifically to introduce undergraduates to the work of the Wartime quartet. It contains selected extracts from various texts, introductory readings and audio recordings alongside questions to accompany each extract, reading or audio recording.

How to get involved

Our undergraduate women have formed their own group and are meeting regularly to drink cocoa and to read and discuss the philosophy of this remarkable quartet.

This guide was written for groups of women wanting to set up a reading group. It includes 8 texts and accompanying questions as a starting point. 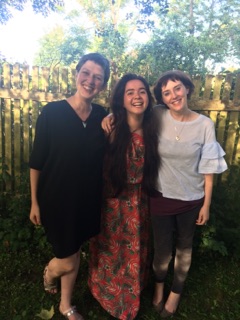 Find out about Internships