Intern Diary 4: One Picture, Many Thoughts 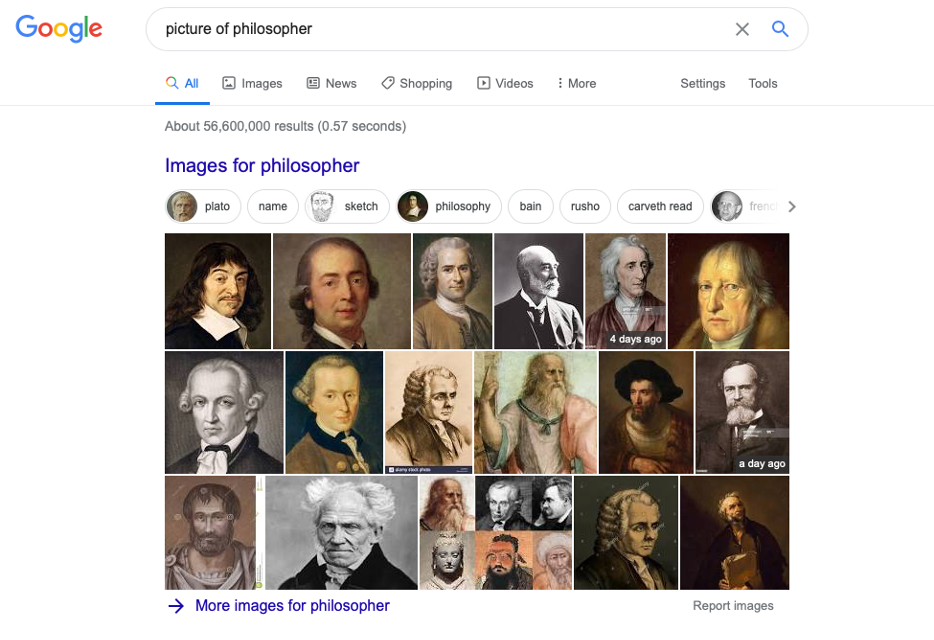 “Man is a creature who makes pictures of himself and then comes to resemble the picture.” (Iris Murdoch, “Metaphysics and Ethics”)

I’ve been thinking about this insight from Iris Murdoch a lot since listening to a podcast interview of Rachael Wiseman and Clare MacCumhaill on The Philosopher’s Zone a few weeks ago. In the interview, they say that this line from Murdoch is both a warning and a source of hope—images can spur us on to be better people, but we risk moving dangerously far from reality when we spend too much time with the pictures we have.

Directly after this familiar quote, Murdoch says: “This is the process which moral philosophy must attempt to describe and analyse.” I take this to mean that Murdoch thinks this process of image-making is worth paying attention to.

Reading through Murdoch’s philosophy, I’ve noticed that she often asks questions about what we are picturing when we talk about different moral topics. Her paper “Metaphysics and Ethics” begins with such a question: “What should a philosophical study of morals be like?” In other words, what does it look like to do this activity, or what do we want it to be like? In her essay “On ‘God’ and ‘Good’” she asks another picturing question: “What is a good man like?” Throughout all three of the essays in The Sovereignty of Good, she gives a few different examples (pictures) of what she imagines good people to be like.

As for her novels, I see an example of becoming the images we create in The Word Child. The main character, Hilary, consistently asserts (to himself and others) that he is a bad person, and throughout the novel (which is narrated by Hilary) there is a sense that he is doomed to be that way. He doesn’t think that he could change, even though many people in his life tell him otherwise. He is so fixed on the image he has of himself that he isn’t able to take the perspectives of those around him seriously.

In short, I’ve been thinking a lot about images lately—trying to notice what images I use and how they direct my attention particular aspects of myself and others. I wonder if become our images because that’s where our attention is drawn. Maybe we feel pressure to be a particular kind of person, fulfil a particular role, or present a particular image or version of ourselves to the world. Lots of people have role models and heroes they aspire to resemble—there is something about those images that is appealing and inspiring. We want to have the same spirit or the same air about us. We like to think of ourselves as particular kinds of people.

I also wonder—what images are our societies showing us that we ought to strive for? What do we think that it is good to be? What kinds of social pressures do we feel we need to fulfil to be successful, popular, accepted, etc.? 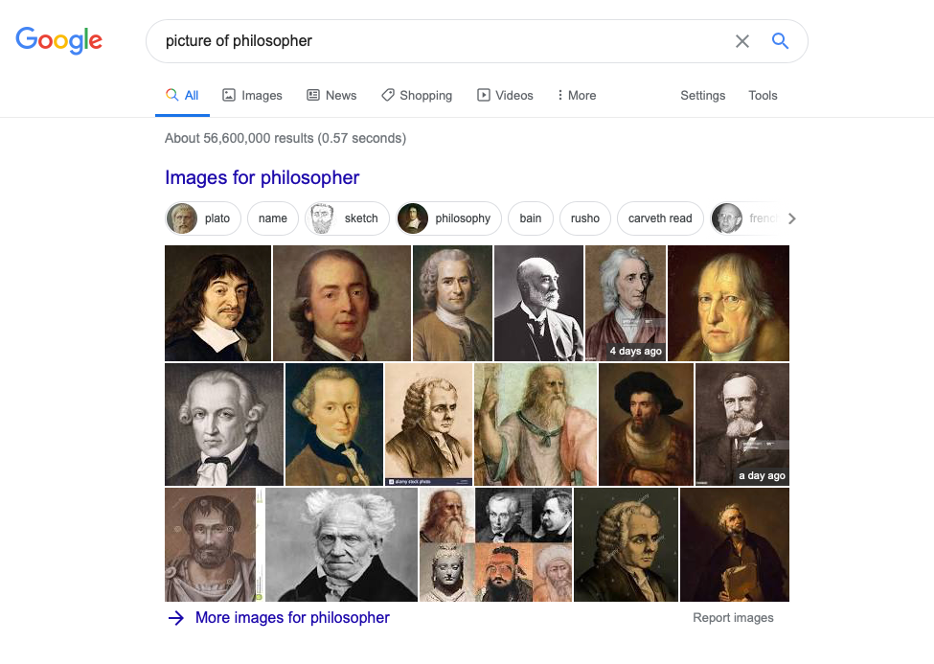 As for philosophy, the image that immediately comes to my mind is of a man (I tend to picture Descartes or Kant or Hume) sitting and thinking alone, undisturbed by the world. They are self-sufficient and certain about their ideas. I don’t like this picture very much because it feels outdated in many ways, and I’d like to think that philosophy can be a shared activity, not exclusively done in dark and dreary rooms all alone. Mary Midgley offers another picture (in “Rings and Books”); the ‘philosophic adolescent’ is someone who “withdraws himself from the influences around him to develop ideas in harmony with his own personality.” This isn’t a bad thing—Midgley admits that it is “necessary if the personality is to be formed at all.” Sometimes it is good to go away to a quiet place to be able to work through ideas on your own, to figure out what you think, without outside influences being too oppressive or loud and distracting. Sometimes we need to focus. But once this work is done, it is important to come back to the group, to our shared reality, and to see how your ideas fit with the rest of life and others’ thoughts. Herein lies the issue for Midgley:
“The great philosophers did not return. Their thoughts, unlike yours and mine, had power enough to keep them gazing into the pool of solitude.”
Even this picture of the adolescent might make us think that we need to go away, figure everything out, and then return to reality with answers ready in hand. Again, this isn’t bad per se, but it’s also not the only way to think, and it’s not the best way to approach thinking in every situation. I think that it’s important that we find ways of thinking together and working in collaboration with others.

The picture of the good student that I have is very similar to the philosopher in that the good student is self-sufficient and able to be successful on their own. The good student goes away to think and learn, and comes back having absorbed all the information given to them and is able to engage with topics because of the learning they have done on their own. In addition to this, the good student is a volunteer, plays sports, is a leader in extracurricular groups, maybe has a job as a tutor or teacher’s assistant, etc. etc., and basically, they would have to have an infinite amount of energy, along with the ability to live off of very little sleep, to be able to participate in all of their activities while keeping up with their school work. At my school, I see a lot of people trying (successfully…?) to live up to this image. It creates an environment of high achievers and of competition, but also lots of mental health issues and wide-spread imposter’s syndrome. Nobody seems to feel good enough because nobody can actually live up to the ideal picture we’ve created. (But really, people do try! And they portray the image and perpetuate its fantasy through their social media accounts.) The longer I live as a student, the more I realize that I don’t fit into the ‘perfect student’ mould because I have a limited amount of energy and resources. By letting go of that image, I can still succeed and be proud of my work and all the things I do, but without feeling inadequate on a regular basis. Now, when I think about my own academic success, I have a picture that is particular to my own strengths and weaknesses. Again, the picture of the good student isn’t necessarily bad, but it is dangerous. It can challenge people to put more effort into their education (good!), but that message can be corrupted, creating environments of high stress and anxiety (bad). As I notice more pictures like this one, I find myself asking, what purpose does this image serve, and who it is serving?

I don’t think that the pressure to be productive exists exclusively in academic spaces—it seems to pervade throughout societies as part of our economic models. (I’m thinking of capitalism.) Lately, I’ve noticed a diminishment of the pressure to be productive because of the pandemic and the world shutting down. Nothing is normal, so the old expectations don’t hold the same weight as they did before. Personally, the slower pace has been great because it’s given me more control over how I do my work and it makes it easier to manage what I feel is expected of me. But now, as things are starting to go back to our previous ‘normal’, I’m starting to feel the pull of the image of success and of productivity once more. No question, it is good to work and to get things done, but it is easy for some people (myself included) to overwork themselves, especially with the exalted picture of the successful and productive human in mind.

When Murdoch talks about the attributes of the good person, the picture she describes is of a person who knows how to pay attention to others and where to direct their attention. It strikes me that attention is not an easy, quick process—it requires a lot of time and effort to look. From Murdoch: “The love which brings the right answer is an exercise of justice and realism and really looking.” Similarly: “It is a task to come to see the world as it is.” (both from “The Sovereignty of Good Over Other Concepts”) Attention is not a quick and easy task, nor is it ever really finished. As a challenge to the productive image, the good person is patient, attentive, and takes time to discern and to think clearly. I think it is easy to lose these qualities in our fast-paced world because they take so much time and effort; but (following Murdoch’s philosophy) I think it is better to attend to reality than to get stuck with unhelpful images of what success is ‘supposed’ to look like. Maybe it’s time we started thinking about some new/different pictures that more suited to our time and circumstance.