We’re in the 6th Hannah Directory!! 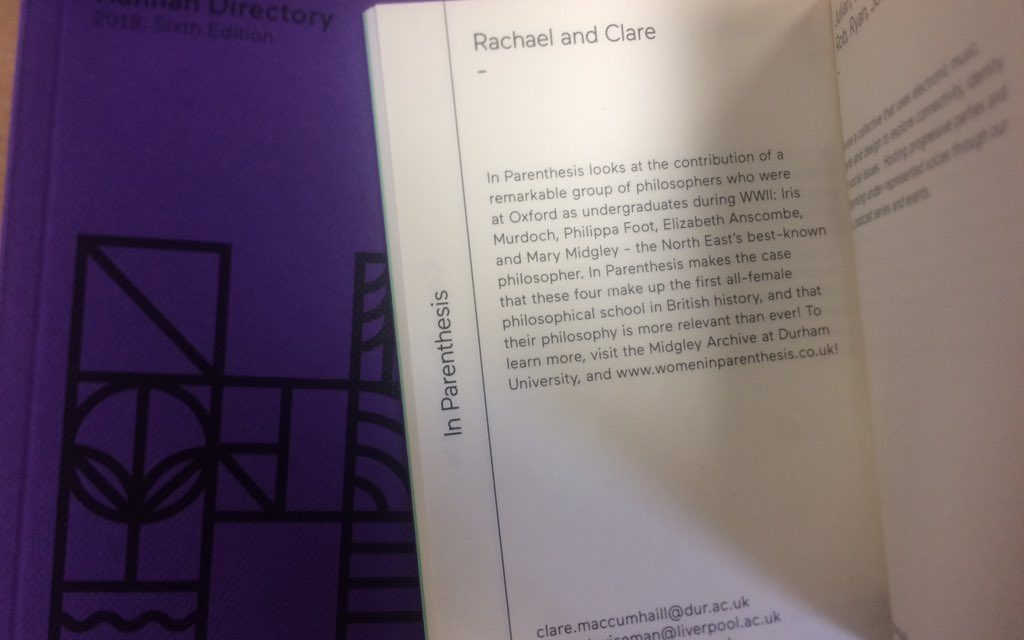 Hot off the press!

The Durham and Liverpool-based In Parenthesis project, directed by Dr. Clare Mac Cumhailll (Durham) and Dr. Rachael Wiseman (Liverpool) has been selected among the highlights of the year in the north of England.

In Parenthesis studies the collective corpus of philosophers G.E.M Anscombe, Iris Murdoch, Philippa Foot and Newcastle’s own Mary Midgley. The project argues that the quartet – who were all at Oxford during WWII – should be recognised as the first all-female school in Analytic Philosophy. The goal of the project is to rewrite the history of 20th philosophy in the UK.

In Parenthesis has been included in the sixth annual edition of Hannah Directory.

Hannah Directory is a print publication, website and launch week of events celebrating the great stuff that people are doing in places in England’s north, and asking how even more of it can happen.

Founded in 2013, the directory takes a snapshot capturing some of the year’s best activity in the arts, music, business, new kinds of social organisation, scientific discovery and great stuff from any field. It is named after and inspired by Hannah Mitchell (1872–1956), a suffragette and rebel who tried to create ‘beauty in civic life’ in her work on public libraries, parks and gardens.

In Parenthesis was included in recognition of the fact that has a significant gender activism in philosophy component and has been recognised internationally for its transformative potential and significance.

“In Parenthesis was selected for this year’s directory because it is helping to change the face of philosophy in the North East, with Mary Midgley at the helm ” said Andrew Wilson, who organises the directory.

In Parenthesis joins more than 100 people and organisations to have taken part in Hannah Directory so far. Most of the contributors to the directory have been recommended by others. Each new link between them is a pathway along which ideas, trust, and even co-operative activity can be shared across the region. This unique network is one of the broadest in England’s north.