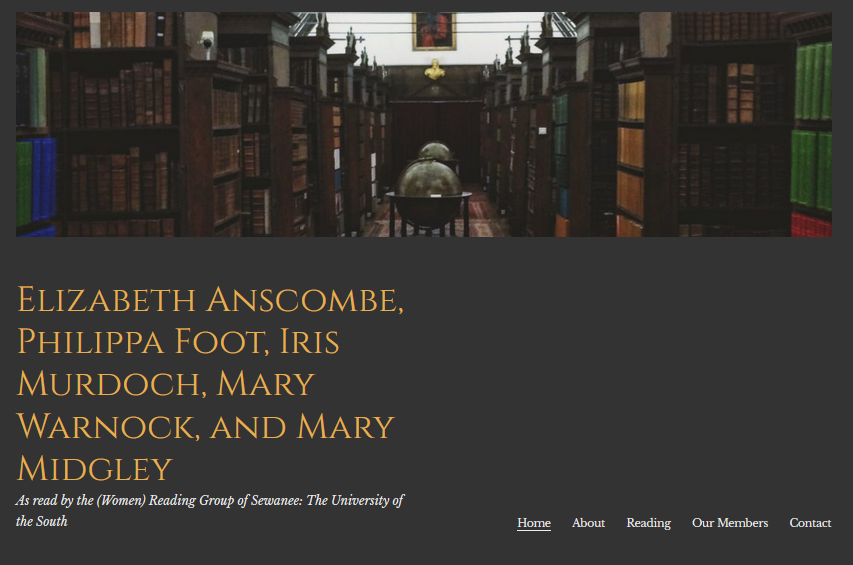 The Philosophy Phemales
By Annie Bowers, University of Sewanee 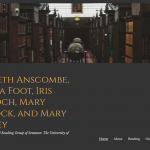 How was the group was founded?

At Sewanee: The University of the South we have an all-male, five-professor philosophy department. As an incoming freshman, I was lucky to be placed in the philosophy 101 class that I requested, because it was a small, fifteen-student discussion class. The work was quite challenging, and though I was usually very reserved in the classroom discussions, I quickly grew to love the assigned readings and the way that the subject forced me to think deeply and complexly. Though I did not often communicate my responses to the readings vocally, I was always comfortable knowing that I could express them in the daily writing assignments. I suppose that my professor could detect my growing passion for philosophy, because one sunny afternoon while I was sitting in the grass waiting for class to start, I received an email from him recommending that I contact Dr. Mark Hopwood about an all-women philosophy reading group that was in the works.

Four other interested female philosophy students and I met with Dr. Hopwood a couple of times to learn somewhat about what the Durham reading group was doing. We threw around some basic structural ideas, but after those few meetings Dr. Hopwood (who has done extensive studies on the works of Iris Murdoch) left the group completely in our hands. He told us that he would continue to be available to us for guidance though, if needed. We created a Facebook group in order to communicate with one another, and chose one hour per week to begin meeting once the new semester commenced. Besides me, the group was composed of one senior, two juniors, and one sophomore. Being the least experienced with philosophy, I let the others take the lead in the beginning. I also remember being very nervous at the start because I didn’t know any of the other women, and they all seemed so knowledgeable about philosophy, my newfound scholarly love.

Over the winter break from school, we all read chapters 4 and 6 from Mary Midgley’s The Owl of Minerva, which discussed her Oxford days and her relationships with Murdoch, Anscombe, Foot, and Warnock. One of us also created an online blog that we would use in the coming semester for posting responses to our readings and discussions. I was so excited to be part of such an intimate group, attempting to replicate the experience of some of the biggest female names in twentieth-century philosophy.

How does the reading group in work?

It was kind of awkward at first and pretty rocky getting started, simply because we didn’t have a designated leader, or any specified plan of what we were going to read and when. But we did have our weekly meeting time to cling to, and eventually we found our rhythm. It worked well to designate one discussion leader each week. They would pick out a reading for the week that interested them (usually one essay, or two short ones), take close notes on the material, create discussion questions, and then facilitate the group discussion at the meeting. In this way, the responsibility was evenly distributed among the group, and each of us could choose weeks that worked well with our schedules to take on the extra commitment.

We met in the back room of a cozy coffeehouse on our campus named Stirling’s, and would usually order drinks and food to enjoy as we talked. Even though our meeting time was technically only an hour in the evenings, we usually ended up staying and talking for two hours or so. There was even one night, after we had finished our discussion, when we decided to start playing a board game together and ended up staying until the coffeehouse closed! This dynamic was definitely one of the most important aspects of the group: a close friendship formed between the five of us. When people discuss philosophical matters weekly together, I think it would generally be pretty difficult to not become close. Philosophical stances are typically very intimate beliefs, and though we were all pretty likeminded on most subjects, there were definitely a few matters on which we were not all in accord. For a light example of discord in the group, I remember there being a strong divide concerning our views on personal boundaries. Some of the group loved to give and receive hugs whenever they meet people, whoever they may be, while the rest of the group felt that hugging anyone except for close friends and family is not just unnecessary, but inappropriate. This subject came up when someone used their opinion on the matter to relate to an argument that we were discussing. It illustrates a simple, but important, difference of personalities that was present in the group.

However, we didn’t hold quarrels in our group. If one of us had an objection to a previous statement, we simply added that objection to the discussion, and the objection was then considered and responded to in turn. We worked together toward solutions, we didn’t compete. There wasn’t any pride involved, leaving the atmosphere totally laid-back and comfortable. This mentality developed completely naturally, never being verbally agreed upon. And of course, the group provided all of us with a much-needed space to vent about the difficulties of being women in the heavily male-dominated field of philosophy.

By the time that I conquered my first turn as the group discussion leader, I was completely comfortable with the other four women. I freely expressed my thoughts as they came to me, very unlike how I behaved in the classroom setting. There was also an unspoken agreement concerning the confidentiality of our discussions, which I think allowed us all to speak freely and naturally. To other groups, I would definitely recommend keeping the size down to about five or six in order to replicate the intimacy that Midgley, Murdoch, Foot, Anscombe, and Warnock had among them. I would also recommend having a good amount of variation as far as experience level goes, so that as students graduate, new women can be added from the incoming class. It also ensures that there are a variety of viewpoints, and is a great educational experience for younger students (like me) who don’t yet know specific terminology and references. The older philosophy majors in the group loved assisting me with expressing my ideas with proper terminology and recommending other resources to me for further reading and development. I think that after all of the practice expressing my arguments in the group, I will be much more confident speaking up in my male-dominated and male-taught philosophy classes this coming semester. Although I was never scared of speaking out against the men in my classes, I’ve realized that traditional gender roles do subconsciously and subtly affect my behavior.

My last recommendation is to meet regularly and to be sure to leave extra time for the conversation to wander to more personal matters during the meeting. This will be very conducive to creating a strong bond between the women of the group!

Overall, the all-women reading group was a wonderful academic and social experience, and the philosophy women at Sewanee will be continuing it next semester!

What we Read Last Semester

The Owl of Minerva, Mary Midgley, Chapters 4 and 6

From Human Life, Action, and Ethics, G.E.M. Anscombe (ed. Mary Geach & Luke Gormally): ‘Modern Moral Philosophy’, ‘The Dignity of the Human Being’, ‘One Must Obey One’s Conscience’, ‘Murder and the Morality of Euthanasia’

From Existentialists and Mystics, Iris Murdock (ed. Peter Conradi): ‘Art is the Imitation of Nature’, ‘The Sovereignty of Good’, ‘Thinking and Language’, ‘The Image of Mind’, ‘Art and Eros: A Dialogue About Art’