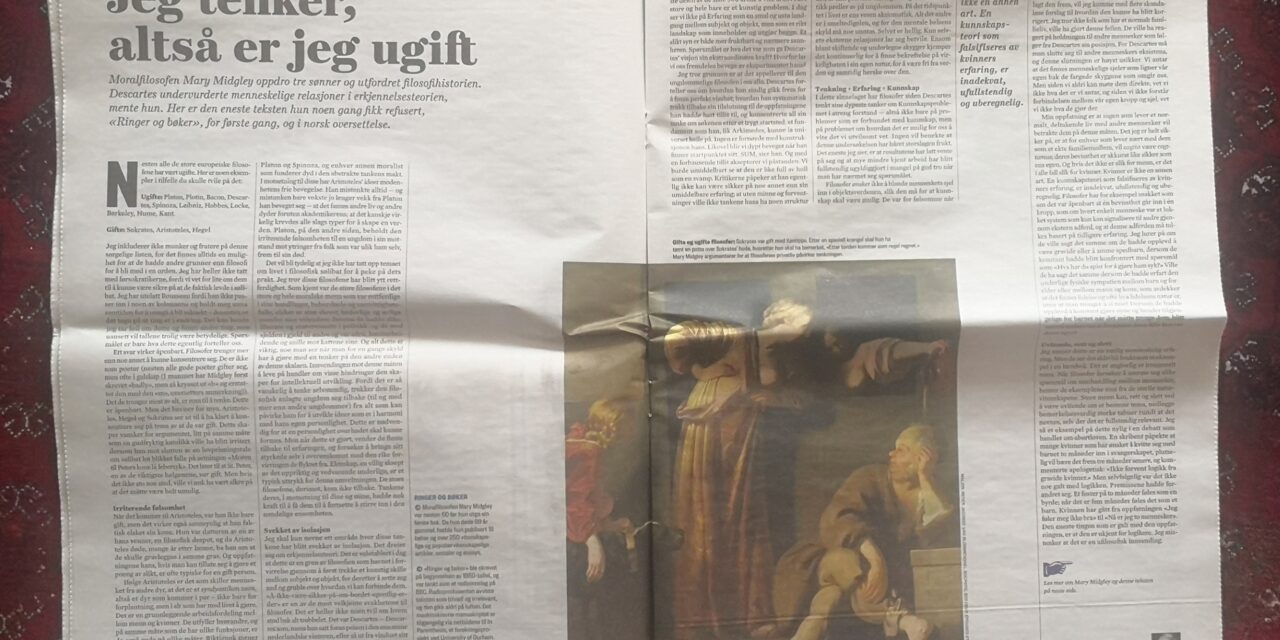 Mary Midgley’s once rejected radio essay “Rings and books” has been published for the first time in a Norwegian translation.

I first came across Mary Midgley’s essay “Rings and books” when I read her memoir The Owl of Minerva. There, Midgley writes about an essay she wrote for the radio show Third Programme on BBC about the fact that many of the great philosophers have been unmarried, and how this has shaped both our understanding of what counts as genuine philosophical problems and our view of which methods are adequate to solve these problems. This did not seem to me a radical suggestion, so I was surprised to learn that it was rejected on the grounds that it was a “trivial, irrelevant intrusion of domestic matters into intellectual life” and never aired. I was curious to read it, but could not find that it had ever been published anywhere.

In the essay, Midgley takes as her point of departure Descartes’ Meditations. Descartes describes how he places himself comfortably in front of the fireplace, free from distractions, in order to examine his most fundamental beliefs. As is well-known, Descartes concludes that the only thing he can know for sure, is that he himself exists. But when he reached this conclusion, Midgley writes, it could only be because he was a childless bachelor. Otherwise he would never have thought that introspection is a solid fundament for philosophy and that we can never be sure about other peoples’ consciousness.

Midgley’s idea about marriage and philosophy may not have passed the test of time – I am unmarried and single, and hope this will not be what stops be from making a decent philosopher. However, Midgley has a bigger point about the importance about the importance of other people and other areas of knowledge for our thinking. This point particularly struck a chord because of the circumstances under which I was reading it – the first pandemic lockdown. I had only been a PhD student for a few weeks when the pandemic started, and was trying to figure out how to write a thesis from the home office. I desperately missed having colleagues and people to discuss with.

For Descartes, however, it is when we withdraw from the world that philosophy can start. He is not the only figure in the history of philosophy who has thought this. The whole purpose of Wittgenstein’s cabin in Skjolden (Norway!), was to withdraw from the Cambridge intelligencia and be able to think in peace. When Nietzsche’s Zarathustra attempts to solve the world’s mysteries, he becomes an eremite and has no contact with the outer world for ten years. (Nietzsche went so far as to warn philosophers not to get married, since this would be little else but a hinderance on the path towards philosophical wisdom.) Henry David Thoreau lived two years in a cabin that he had built himself and writes enthusiastically in Walden about all the philosophical insights he gained while living self-sufficiently and alone.

Were these thinkers ever lonely? Wittgenstein would sometimes praise the loneliness in Skjolden, and other times worry that the lack of human contact would make him depressed. Thoreau denies ever feeling lonely, but he admits that he a few weeks into his stay started wondering whether other people are necessary for living a good life and that he found it unpleasant to live alone. Apparently, this feeling lasted a whole hour. (That Thoreau was as isolated as he gave impression of, is doubtful – what is presented as a cabin in the wild darkness of the forest, was in reality located a 20 minute walk from his family home, which he would visit several times a week to eat dinner with family and friends.)

Perhaps these thinkers would have considered quarantine a welcome break with promises of productivity – especially since neither had children that required home schooling. However, isolation can also be a hinderance for productivity and creativity. When we are alone, we might be free from distractions and other people, but sometimes those distractions can make us think about things we would otherwise have ignored. For Midgley, the danger of isolation is that it limits the way in which we think about the world. What she objects to, is the idea that philosophy is purer and truer if we take ourselves and our own experiences as a point of departure, ignoring what we can learn from others. Midgley’s goal was to challenge what she thought was a monolithic and reductive approach to philosophy, and show how useful it can be for our own thinking to reach beyond ourselves.I found a lot of comfort and enjoyment in the essay, and had the idea to translate it for Salongen, a popular philosophy journal in Norway that I help edit. I contacted Mary Midgley’s son, David Midgley, to ask for permission to translate and publish the text, something which he graciously granted. It was published in November 2021.

Scandinavian readers can find this here

Though Midgley’s writing is very accessible, the translation proved more difficult than I had imagined. Her humor and witty turn of phrases are hard to render in translation, and I am not sure I got everything. I hope, however, that I have done her justice.

The essay has been very positively received, and the weekly journal Morgenbladet, one of the biggest journals in Norway, also published it in its entirety a few weeks later. I have received several messages from people who had never heard about Midgley before and read her for the first time, and with whom her thoughts resonated. 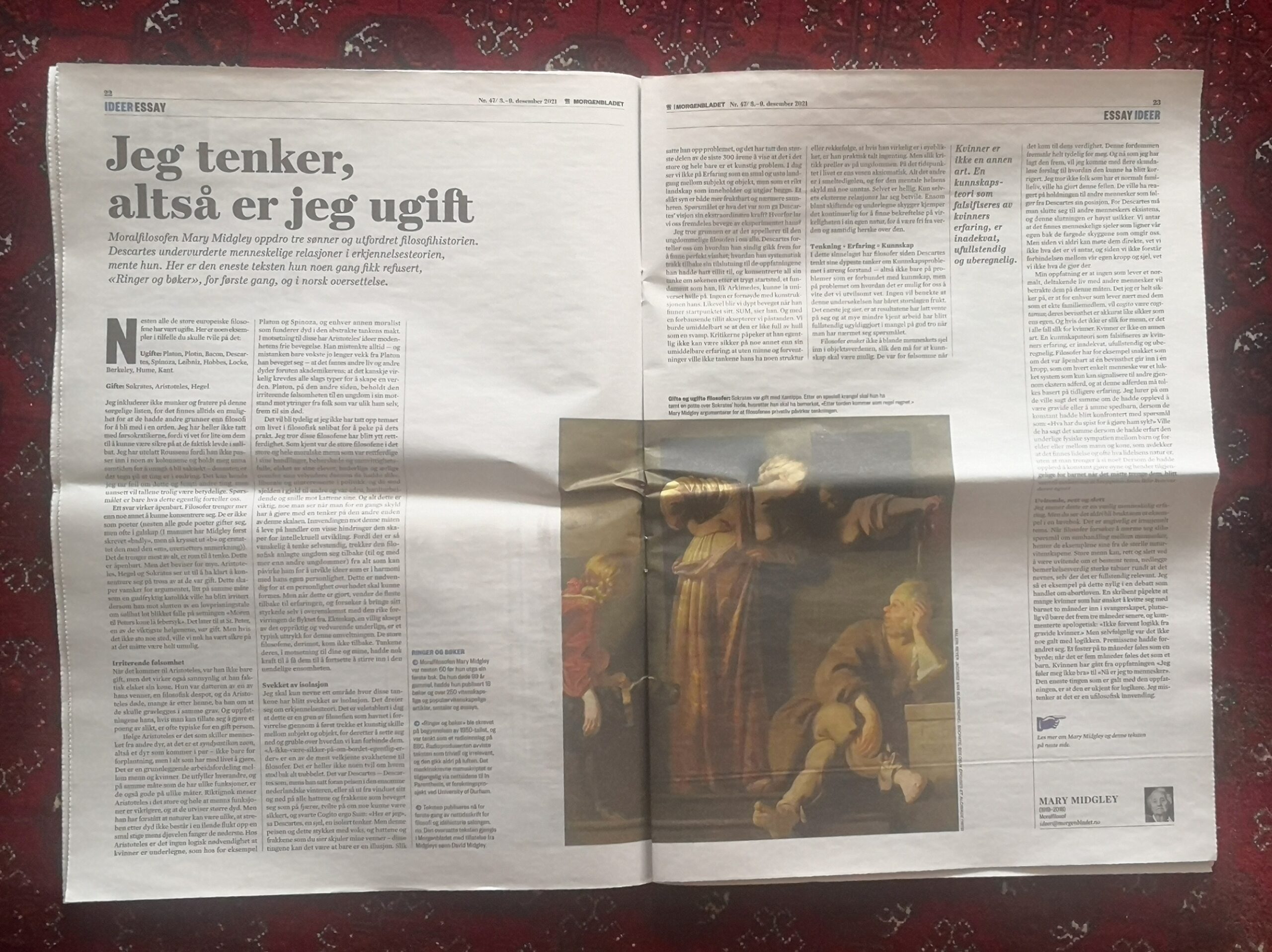 Additionally, the Norwegian radio program Verdibørsen decided to do a radio segment on the piece, and the whole translation was recorded and aired as part of it. Finally, the essay has appeared in the format it was intended for, albeit in Norwegian.

Listen to the Radio Segment