Carrying on the Midgley legacy: inspiration from the archive, Jane Heal (10/11/2018) 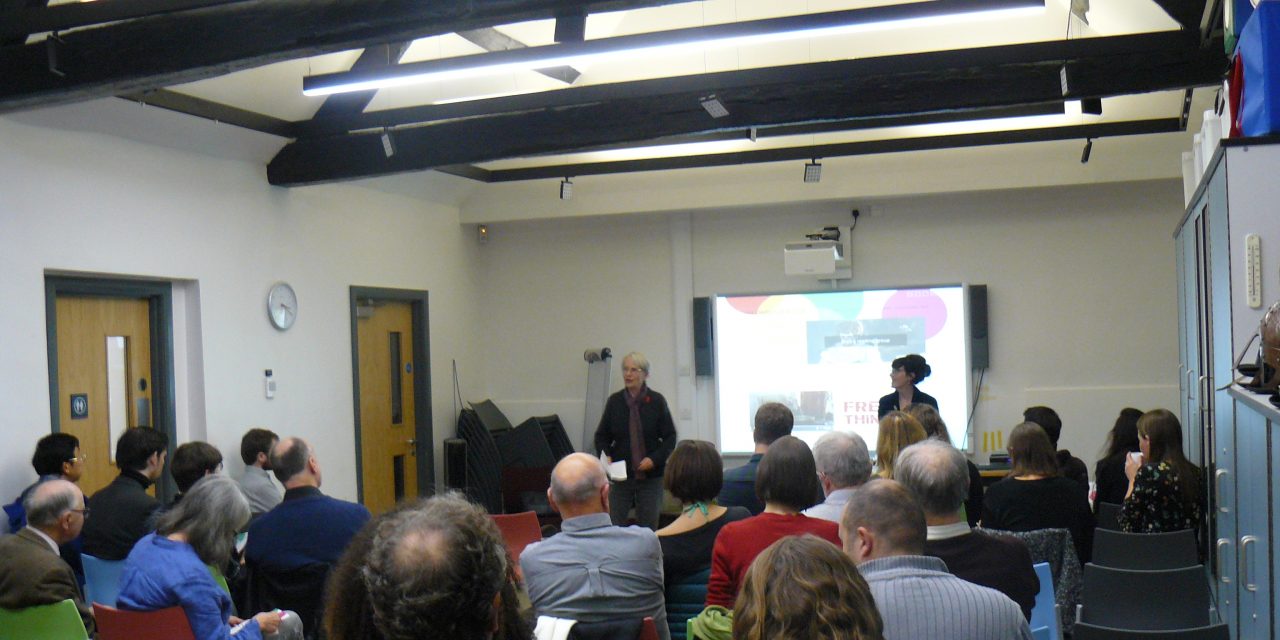 At the Midgley Archive Launch we heard a series of wonderful talks from distinguished guests. Here, Professor Jane Heal takes inspiration from the archive and reflects on the virtues of breadth of interest and courage.

I would like to start by saying what am sure we all feel, which is how very sad we are that Mary is not here herself, or at least present via video-link, as we had hoped. It would have been wonderful to hear again her characteristic tones and say to her how much we have appreciated her work and her friendship over the years.  Her sudden death has been a shock which we are still getting over.

We are here today, however, to speak not about this sadness, but about why it is so good to have open the archive of work which she and Geoff have left. And I want to talk about some ways in which their work can be an inspiration and encouragement to us now. I do not intend to talk about particular philosophical themes. I am sure there will be teasing out of how Mary’s ideas developed, what her methods of working were and the like. For certain there are many fine projects of this kind to be pursued from the archives and many fruitful ways in which her ideas and Geoff’s ideas could be developed. My topic here is rather the spirit in which both she and Geoff did philosophy.

I want to remark particularly on two virtues manifest in their lives and their work. The first is breadth of interest and sympathy, and the second is courage. These are distinguishable but perhaps intertwined. As Mary said, good things are often good in more than one way. And different aspects of the valuable, particularly when it is virtues we are thinking of, may support and enrich each other.

We live in a culturally created, human world which emerged from, and is continuingly sustained by, the non-human, natural world around us. It takes energy and intellectual curiosity to appreciate the immense complexity and interconnectedness of this whole. Some people can muster a good deal of energy and curiosity, but use their powers to pursue their individual interests and ambitions. But other people, of particularly striking energy and intelligence, channel their capacities differently. They have, to start with, the largeness of vision and the open-minded curiosity to want to know about and understand the myriad interacting levels, aspects and elements of the world. But they have also enough objectivity to appreciate that the human world is our joint creation and is carried forward by the co-operative contributions of many people of good will. In consequence, their central project is to reflect on this complex whole of which we are part, and to contribute, so far as they can, to its going forward in a better way rather than a worse.

Both Mary and Geoff were people of this generous-spirited kind. Both of them had a wide range of interests, together with the drive to share ideas for the common good. Geoff was immersed in music, logic, computers, and the philosophies of Kant and Wittgenstein, two seriously challenging thinkers. In all these areas he was deeply engaged, knew what he was doing, what he was talking about. And he was a great teacher, wanting to share insights, to draw others in to active participation in exploring and creating.

And with Mary the range of her reading and sympathetic understanding was vast, encompassing novels, children’s books, theology, evolutionary theory, psychology, history, futurology, ethology, biography, poetry and much more.  And whether she was reading, thinking, writing, teaching, talking, travelling, meeting, she got stuck in, she was engaged, always on the side of humanity, of living a worthwhile life, and of enabling others to do the same.

Not all of us can muster her energy. I know that I can’t.  But in the archive is a partial record of what she and Geoff did, which with luck will inspire some of us to try to keep the breadth of interest and sympathy alive, to try to look beyond our familiar world, with its preconceptions and comforts, in a generous and co-operative spirit.

Here we come to the second virtue I mentioned earlier, namely courage. The quartet of philosophers who are the focus of the In Parenthesis project came together during the war. And because of the war, where many men had gone to the armed services, women found a differently shaped space in which to philosophise. That fact is of great interest. And we look to the In Parenthesis project to fill us in on more on its ramifications. But here I want to highlight something different  – the fact that because of the war things then were tough for everyone.

This has been borne in on me recently by reading letters between my parents, William and Martha Kneale. They were philosophers teaching in Oxford in the late 1930’s. They were a few years older than Mary and Geoff and had been married eighteen months at outbreak of war. At that point my mother remained in Oxford, part of the small group keeping the teaching and examinations going during the war years. And my father was one of the academics co-opted into the Civil Service, working in the Ministry of Shipping in London. They wrote to each other two or three times each week when they were apart.

What the letters reveal is same world of which Mary writes in The Owl of Minerva (p 105). Commenting there on the phrase ‘war on terror’ and its misuse in the early 2000’s, she talks about what it is like to be really at war:  ‘Public transport isn’t working normally; when you can get it, it is slow, overcrowded, unheated and liable to keep stopping or going to the wrong station for unexplained reasons. Everyday life is cluttered with extra difficulties caused by such matters as air-raid precautions, even if you don’t have actual air-raids. The news, though clearly censored, tells you of enough troubles, bearing directly on the survival of your country and perhaps of your civilization, to let you know that your own future as well as other people’s is profoundly uncertain.’

So she and Geoff understood what can happen when greedy, tribal, blinkered, frightened ways of thinking get a grip. Human beings can do terrible things, which make the survival of our civilization profoundly uncertain. And they knew how easy it is to fall into those ways of thinking, when we demonise our opponents and become ourselves tribal, blinkered and callous.  It takes courage to face up to bad things which may happen, to disentangle the complexities of human nature which drive them, to challenge the fantasies and simplified pictures which may grip us, to speak truth to power, to try to draw others in to put their shoulders to the wheel for good. And it takes courage to keep on doing all this, year after year, decade after decade, as Geoff and Mary did together and as Mary carried on doing for twenty years after Geoff’s death.

The archive is a great thing because it makes available the record of these inspiring lives, with their breadth of interest and their courage. There may be tough times ahead and we need this spirit more than ever.